Tickets are now on sale for Shang-Chi and the Legend of the Ten Rings, available in theaters everywhere on September 3. The second film in the Marvel Cinematic Universe’s “Phase Four” (following this summer’s Black Widow), Shang-Chi also carries the distinction of being the first Marvel film to feature an all Asian and Asian-American cast, which makes it a historic one for representation on the big screen. It is also a Marvel movie that is tasked with not only introducing a brand-new hero and mythology to the MCU, but also continuing a larger evolving narrative that introduces Marvel’s multiverse and all that comes along with it.


Shang-Chi director Destin Daniel Cretton laughed off questions about how his film continues the multiverse story featured in TV shows like Loki and What If?, simply noting that he “can’t really say,” alluding to the many surprises in store for fans when they sit down in theaters to watch the next chapter in MCU storytelling. “This movie is the first time that I think Marvel has put a lot of their emphasis in the action design and, specifically, the choreography,” Cretton told Fandango. “And it’s their first time really tackling a more purely martial arts movie, which is super exciting to be a part of. They obviously didn’t hire me because I’m amazing at martial arts movies, so there’s also a very strong emotional, dramatic and comedic element to these characters.”


Cretton is right – he isn’t a famed martial arts director, but he is a filmmaker known for creating memorable characters and, perhaps most importantly, unforgettable crowd-pleasers. His debut feature film Short Term 12 was an indie sensation that introduced the world to an up-and-coming actress named Brie Larson (herself now a Marvel star), and his most recent film, 2019’s Just Mercy, earned many accolades for its stellar performances from Jamie Foxx and Michael B. Jordan, both of whom are also Marvel stars. Now Cretton tackles his biggest film yet – a globe-spanning, action-packed superhero movie featuring an ensemble cast full of current and soon-to-be screen legends.


With tickets now on sale for Shang-Chi and the Legend of the Ten Rings, Fandango is debuting a new scene from the film (watch below) along with this conversation with director Destin Daniel Cretton, in which he talks about the film, its themes, its hero, its villain, its surprising roster of characters (including a little on the return of Tim Roth’s Abomination) and more.

Fandango: So how would you say this film is unique and different from what we’ve seen from the Marvel Cinematic Universe before?


Destin Daniel Cretton: What I love about Marvel movies is that they like to change things up. I think they like to push limits within the world that they’ve created, but there’s such a cohesiveness to the world that they’re creating too, so it still all makes sense. This movie is the first time that I think Marvel has put a lot of their emphasis in the action design and, specifically, the choreography. And it’s their first time really tackling a more purely martial arts movie, which is super exciting to be a part of. They obviously didn’t hire me because I’m amazing at martial arts movies, so there’s also a very strong emotional, dramatic and comedic element to these characters.


I really fell in love with these characters as we were making [the film], and I think that is something that Marvel continuously does well, is create characters that you can really relate to. And then the most obvious thing is that this is an all Asian and Asian-American cast, which, for me personally, is extremely exciting to have been able to be a part of.


Fandango: This is the second film in the MCU’s Phase Four. The first, Black Widow, was a prequel set between Captain America: Civil War and Avengers: Infinity War. With regards to the MCU timeline, when is Shang-Chi and the Legend of the Ten Rings set?


Destin Daniel Cretton: Shang-Chi is set in the present day in the MCU timeline.


Fandango: Okay. So, like post-Blip, present day, is where we’re at?


Fandango: If Black Widow is a spy thriller, what kind of film would you say Shang-Chi is?


Destin Daniel Cretton: I think Shang-Chi is a cross between a classic kung fu film and a family drama, but it’s also really funny. 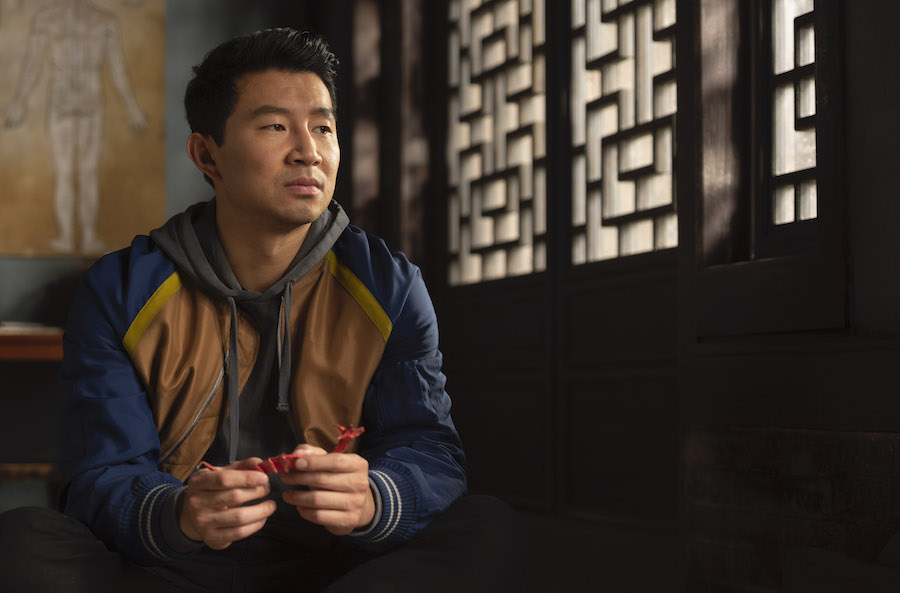 Fandango: Talk about the film’s hero, Shang-Chi. This is a character folks have been trying to bring to the big screen for a while now. What is your favorite thing about the character?


Destin Daniel Cretton: I mean, I find Shang-Chi and his journey extremely relatable. He is somebody who has a lot of pain in his past. He’s now in his twenties and he is only just beginning to learn how to deal with it. He is a lot like me and a lot of people that we all know, where we have a tendency to cover up our trauma and pain with humor and act like everything’s fine when it’s not. I think Shang-Chi does that, to a point. We find him in this movie facing things for the first time that he’s been trying to avoid for a very long time. I think his journey is a journey of self-discovery. It’s a journey of stepping into who he is and what he’s meant to be in this world. I think that’s something that, at least, is very relatable to me — and I think it’ll be very relatable to a lot of people.


Fandango: We’ve seen other MCU heroes wrestle with the relationship that they have with their families, specifically their parents. How does the complicated dynamic between Shang-Chi and his father, Wenwu, present a fresh take, with regards to the MCU? What is that relationship like?


Destin Daniel Cretton: I think what Tony Leung brought to the character [Wenwu] is something that is so surprising, whether it’s for the MCU or just the superhero genre in general. Tony brings layers — layers to this character that are extremely unexpected. He is not a two-dimensional villain. He is a fully realized human who may not make decisions that you agree with, but I do think you will relate to the reasons that pushed him to make those decisions. I think with regards to the conflict between Shang-Chi and his dad, one of the things that we really wanted to remind people of is that, even though this relationship is very conflicted and has a lot of complications to it, there is always love. There is always love there between father and son and the entire family. In a lot of ways that love is the root of their pain [and] that is pushing them to do things that may not be so nice. 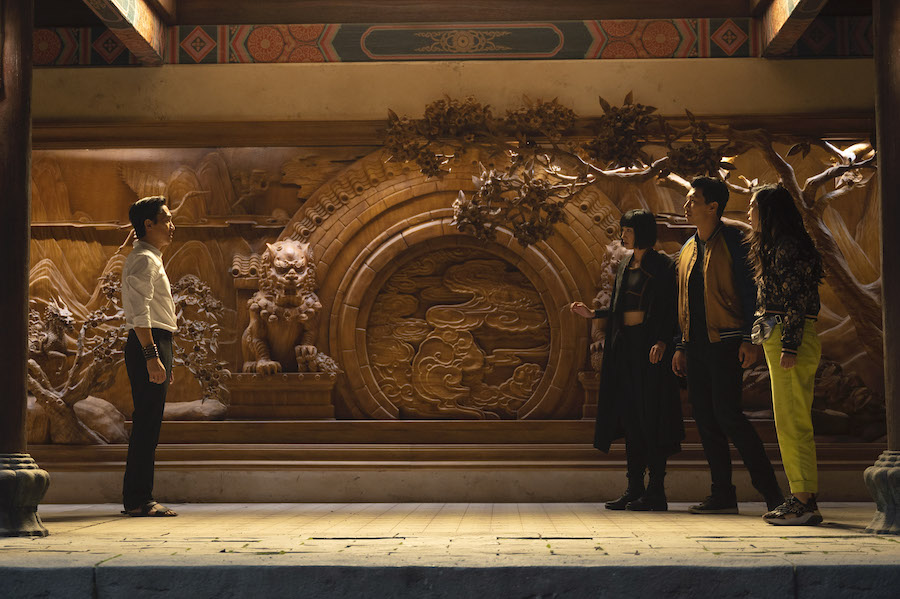 Fandango: Along with this conversation, we’re debuting an action scene from the movie where the characters are fighting on some scaffolding. Can you set up this scene and talk about how it was executed?


Destin Daniel Cretton: This is a really exciting scene. Brad Allan was our second unit director and he and one of our great choreographers, Peng Zhan, choreographed this fight sequence. One of Brad Allan’s heroes is Buster Keaton. You’ll see a lot of Buster Keaton-like storytelling throughout this sequence, a lot of physical comedy, a lot of setups and payoffs. It’s just a really exciting sequence and a small taste of what our movie has to offer in terms of its action.

Fandango: Right on. And what about the Ten Rings? What is this organization? How can you set them up? We were originally introduced to this shadowy organization back in the first Iron Man film, and so who are they when we meet them in your film and what threat are they posing to the world and to our characters?

Fandango: I always love asking for cinematic inspirations while filmmakers are preparing for a film. Was there anything that you were watching to feel inspired at the time? Did you have the cast watch any films, in terms of tone or character work or anything like that?


Destin Daniel Cretton: Yeah. One of the very loose inspirations for tone and character was Good Will Hunting, which may be a surprise. Will Hunting is a character that I think has a lot of similarities to Shang-Chi, just in that they have a big secret and they have a lot of baggage that they have to learn to deal with in order to step into their fully realized shoes. Some of the other inspirations… every Jackie Chan movie ever made, the Ip Man series — there’s a big inspiration from Jet Li’s Tai-Chi Master, and, of course, Crouching Tiger, Hidden Dragon. There is a long list. I cannot not give enough props to Kung Fu Hustle, which is one of my favorites. We watched a lot of these classic movies to make sure that we were paying proper respect to them and to the long history of martial arts and kung-fu movies that came before us.


Fandango: Tim Roth is returning as Abomination in this film. I think that’s surprising to fans to see that character again since it’s been over a decade since he first appeared in The Incredible Hulk. Is there anything you can say about how he factors into this plot? 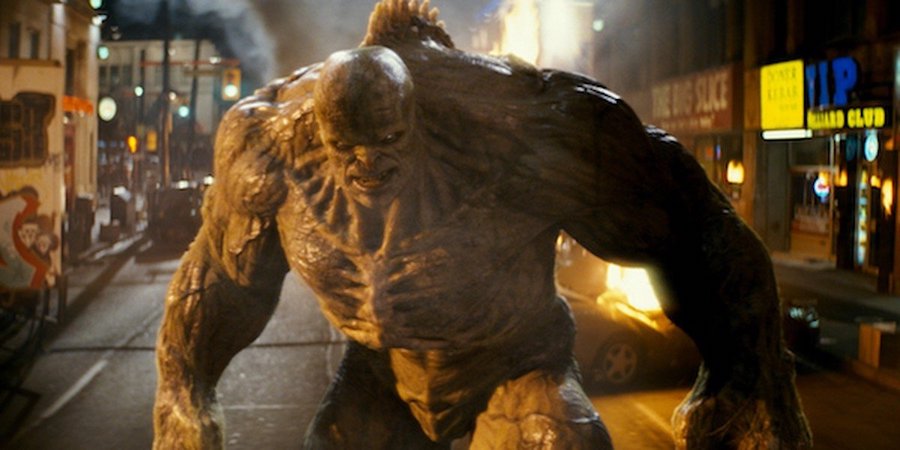 Pictured: The villain Abomination (Tim Roth) as featured in 2008’s The Incredible Hulk


Fandango: Did you change the way he looks in this film? Last time we saw this character was over a decade ago…


Destin Daniel Cretton: I think Abomination got a bit of an upgrade… or we might call it an evolution going through time. I do really love the design that we landed on for that character.


Fandango: Before I let you go, I also have to ask you about a post-credits scene.  Should audiences stick around for the credits?


Destin Daniel Cretton: Audiences should most definitely stick around!


Tickets for Shang-Chi and the Legend of the Ten Rings are now on sale here at Fandango. The film arrives in theaters everywhere on September 3.